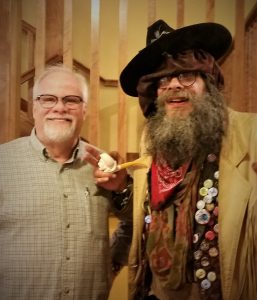 Some people call him the Wizard. Or “that Precious Love guy”. I call him Rob. He called me… Sir Jonathan Moonshadow. Of course, that is not my real name. He says that when he looks at me, he sees the color blue. He likes blue. And yellow. He is a painter. He wears two hats at the same time. One an artist’s cap and on top of that—a cowboy hat. Black round glasses balance askance atop his thin nose making it difficult to see his eyes. His long dark hair and long scraggly black beard looks like a Brillo-pad exploded on his face. Lightening-like streaks of white scatter through this midnight tanglement.

His mouth never moved the same way twice when he talked, especially when he was smoking his cheap corncob pipe. He is thin, and when walking away, his shoulders look like someone forgot to take the clothes hanger out of his shirt.

I met him at my place of employment over eight years ago. I worked at a Christian bookstore that also had a coffee shop and an art gallery. Placed in a college town, it was frequented by students, preachers, and once in a while the ever-present homeless men and women of the town.

Rob came in and looked at the art. That is all. He didn’t talk to anyone. Didn’t look at the books. Didn’t get any coffee. At first, I took him for one of the indigents. Someone no one would ever speak to.

I said a kind ‘hello” to him every time he came in to no response. He was known for being extremely rude to people.

One-day he stood in front of a painting that I did not like, and I told him so. He came over to the counter and we struck up a short conversation about our favorite painters. His was Vincent Van Gough. I told him I was a writer. He said he also wrote. Poems. He shared a poem with me that he wrote. I told him I really liked it so he wrote it down for me in what looked like alien hieroglyphics. Unreadable to anyone but him. I remember one line: “the leaves of three dust winds”.

Not long after our first meeting, my wife of thirty years passed away. Sudden and unexpected. For some reason, I talked to Rob about her a lot. Without knowing it, he helped me grieve by just listening. He let me listen to him talk of his days when he was an up and coming artist. And his younger days of abuse and difficulty with his family. Rob ofttimes vehemently shared his hatred for his mother through clinched teeth and spittle on his wire-haired chin. But mostly, he shared new poems and talked often of his favorite person in history—Wild Bill Hickok. When he said goodbye, he always raised both hands in peace signs and said, “Precious Love.”

At times our discussions leaned toward spiritual themes. They usually ended with him storming out loudly cussing Jesus.

After coming in several times a week for a few years, he came in one day and yelled at me. He was not doing well, and he thought I said something about him he didn’t like. I would never do something like that. To me people are people, whoever they are they deserve kindness. I didn’t see him for several months after that except when he would walk by the store window and flip me off.

Then I heard he was hit by a car.

Not long after that, he unexpectedly came into the store and apologized. “I don’t even remember why I was mad at you,” he said. He shared with me about the accident. He woke up in the emergency room and… walked out. He said he was still having some physical problems since then.

He invited me to his birthday party at a place that sold hot-dogs he liked. I was the only friend that came to his party. I bought him some exotic pipe tobacco as a present.

After several years, I began to converse online with a kind woman in Texas. Being so far away, I told Rob, “Nothing will ever come of it.” He said sarcastically, “Sure it won’t.” He enjoyed listening to my stories about Valorie and our long-distance dates where, although miles apart, we attended the same movies, watched The Voice on TV together, and talked for long hours over the phone.

One day Rob appeared very sad. He’d seen a movie about slavery. It really bothered him. He asked me, “What does it mean to be a Christian?” I gave him a standard answer and asked if I could pray for him. Holding his hand over the counter I prayed for his sadness. “God loves you,” I said. “Precious Love,” he replied.

Our behind the counter, in front of the counter friendship grew. Then came a day after seven years that Rob asked me out of the blue, “When did you become a Christian?” I gave him my testimony of accepting Jesus as my Savior when I was nine years old. I explained to him what the Sunday School teacher that day had called the “Roman’s Road”. As I talked of Jesus’ death on the cross and forgiveness of sin, Rob held his head down. His hats bobbed like boats on a stormy sea. When he looked up tears fell like rain into his midnight sky beard. We prayed together, and he asked Jesus to save him. It was the first time we ever hugged.

We had good times until I told him I decided to marry Valorie and was going to move away. He slammed the door on his way out. I could hear him cursing as he crossed the street.

I bought him a parting gift of a Meerschaum pipe carved like Wild Bill Hickok hoping he would come in again before I left. I prayed he would.

The weekend before my last day of work at the bookstore he came in, we said good byes, and I gave him the pipe. “I will miss you terribly, my friend. But I will see you again in heaven,” I said. When leaving, he started to give me the peace signs, but he stopped, fumbled a little as if not knowing what to do with his hands, and said, “God bless you, Sir Jonathan Moonshadow.”