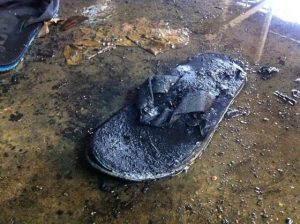 He walked in like a Hollywood movie star who was in-adept at being incognito. Shorts, bright patterned shirt, unbuttoned from the top to reveal a Brillo-pad of chest hair. Tall. Wide shoulders. Worn out flip flops. And sunglasses on a cloudy day.

Not knowing he had walked into a Christian book store he asked, “You got any magazines?”

“Sorry, no magazines. People in the coffee shop just read them and leave them lying around as if we were a library or a doctor’s office. Are you from out of town?”

I love engaging the customers. “What brings you to town?”

“I’m looking for the place that made my sandals.”

I glanced at his flip flops. “Are you talking about Birkenstocks shoe store down the street?”

“No, not there.” He came up to the counter and removed his sunglasses. “A few years back I had these really good sandals but lost one. I need to replace it.”

“Yes. I was a dancer for Elton John.”

Looking at his build, I could see that. “What happened?”

“Well, I was up on stage dancing to the song Tiny Dancer. After the song we took a break, and someone called out to me. I knelt down at the front end of the stage and he introduced himself. He was a photographer and he loved my sandals. He ask me if he could take a picture of them.”

I was hooked. A sandal. A dancer for a famous person. A mystery to solve. Wow.

“I told the man, yes, with one stipulation. That he send me a copy of the pic when it was developed. And that is how I lost my sandal,” he said matter-of-factly.

I was confused. “Did he steal it?”

“No. I got the picture in the mail and he had only taken a picture of only one of my sandals. ONE.”

I wrinkled my forehead.

He seemed to get agitated and slapped the counter. “And that’s why I lost my one sandal.”

“Wow, that’s interesting. Did you find the shoe store?”

“Yes and no. The place burnt down….AND THAT IS WHY THE WORLD IS GOING TO END IN FIRE!”

Before I could say anything, like I was sorry for his loss or something, he continued on and on quoting rock songs that mentioned fire to prove his point. I listened intently. Then he put on his sunglasses and leaned in.

“And did you know that the government is hiding all the UFOs in Western Kansas?”

He continued talking about aliens. When he took a breath, I asked him if he had a web site.

He handed me a business card. Yup. He had one.

I immediately got online to view the website. It was full of conspiracy Mumbo Jumbo—nothing made any sense. I was not surprised.

We said goodbyes. As he sauntered away, I thought of the verse in the Bible, “The day of the Lord will come as a robber comes. The heavens will pass away with a loud noise. The sun and moon and stars will burn up. The earth and all that is in it will be burned up.” 2nd Peter 3:10 and… all because of that man’s sandal.