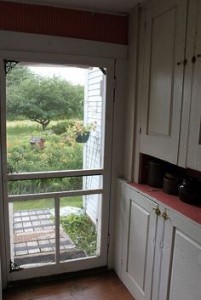 “Hold the screen door,” I told my twin brother.
“What is it?”
“A Nickel!”
I couldn’t pick it up. It was stuck on the wood.
“Your Uncle glued that nickel to the threshold when he was but a boy,” Grandma said. “It’ll take a miracle to get it off of there.”
I tried anyway.

In the house my Dad yelled at my Mom. He did that a lot.

It was the fall of my fifth grade year. We had moved to a farm outside the town where my parents grew up. The population sign said “360” but I think it was less than that.

“Get in the car!” my Dad screamed at my brother and me. He had my youngest sister in his arms. She was bawling loudly. I could smell her soiled diaper. Shaking, I looked at my brother and we both started for the car. Behind me I heard my other sister—five years old—call him by first name and yell, “NO!”

“I don’t want you any way.” He said, and slammed the screen door behind him so hard I was sure the nickel had come loose.

The car spun out and we went to the farm. We lived in my Great aunt’s two story farmhouse. There was a large front porch and a tire swing on the big tree in the front yard. Our Great Aunt had died of nose cancer. She had done too much tobacco snuff and her nose was completely eaten away by the cancer. My brother and I would gross out at the sight of her. She placed a big Band-Aid over the place where her nose should have been.

“How does she smell?” I would say.
And my brother would reply, “Bad as always!”
We would laugh till our sides ached.

But today I wasn’t in a laughing mood. Mom and Dad had fought before. At times he would beat her terribly. This time was different. Everything was wrong.

“Get outta my face. Go feed the chickens,” Dad yelled at me when we got back to the farmhouse.

Scared to say anything, I went out to the chicken house to feed the chickens. While in there, my mind raced. I thought of the time my brother had frightened a skunk in the hen house and had been sprayed. Or the mountain of chicken dung we shoveled out of that place and how accomplished we felt. There was a time we had to dig up rocks so Dad could plant potatoes. We pretended they were Gold.

But, what was I going to do now? I didn’t want to be with Dad. I wanted to be with Mom. So, I ran away from the chicken house, past the cattle into the dark woods. I crossed the creek, and stopped for a moment at a place where I could see the county road. I held my breath and ducked down when a car drove by. Was that Dad’s car? I wasn’t sure.

Eventually, I came over a hill to another farmhouse. I was hot, tired, and thirsty. I needed help.

“Are you run-away?” the man asked.
“No, Sir. I just need to get to town to my Aunt Marie’s house.” He knew the place.
“Well, if’n you’s a runaway, you just crossed the state line and you’re in big trouble.”
“No, sir. Just going to my aunt’s.”

He took me in his truck into town. I kept looking to see if Dad was following us. I spied two rifles in the back window. I made note of that—just in case.

I liked Aunt Marie’s place. Her husband was a short man—the town milkman. We called him “Uncle Pint”. They both were very kind to us. When we got to aunt Marie’s, the farmer didn’t say anything, just dropped me off. I excitedly ran around back as that door was never locked. Perhaps Mom was there.

I walked in, letting the screen door bang behind me. I felt safe and called out to see if anyone was home.

Just then, the front door opened and the room filled with light. I had a direct view. Standing there was my Dad.

On the way, back to the farm, I found out from my brother that during my run my mother had called the police. They told her that they couldn’t do anything as “He’s the father. He has rights.” They allowed her to pick up a few things and she and my sister went to Kansas City. They went to live with her sister.

The next few months I stayed with Dad, my brother, and my baby sister at the farmhouse. Dad would be gone much of the time. Sometimes he would not come home for several days. When he was home, I never knew when he would hit me or ignore me. Some days he would take us with him to the bar. We would sit out in the car and listen to Old-time Radio Mystery Theatre until the car battery would go down. One time he came out with his friends and gave my baby sister a cupful of whiskey. They laughed as they watched the little baby get drunk.

We started fifth grade. The school was so small that they combined fifth and sixth grades. There were only four boys in the class and two of them were my brother and I. But we didn’t get much schooling that year. To care for my sister, my dad made my brother stay home from school. Then the next day, I stayed home and cared for her. I listened to the radio and did what I could. We drank milk and tried to scramble eggs to eat. The school always made sure we had food to eat when we were there. It was then I grew to love peanut butter.

He enjoyed fishing, but would only take one of us at a time so the other could watch the baby. He couldn’t tell us a part and always took my brother. “You should be glad you didn’t go,” my brother said.

One day I was listening to the radio. I remember clearly that the song “Snoopy and the Red Baron” was playing when they stopped the song and I heard this, “We are in a tornado watch.” I had grown up in California. I didn’t know what to do. I went from room to room, carrying the baby. I looked out the windows all day ‘watching’ for tornados.

Eventually, the School made my dad hire a babysitter for the baby.

One night he brought a woman home.“Think we need a maid,” he said.

One of those nights, the woman had brought along her mentally challenged child. He wanted to play cards. So I went downstairs to get them and I saw Dad in bed with the new maid. They would always be gone in the morning and dad would say, “She didn’t work out.”

During that time, we tried to make everything better by living in a world of adventure. We would play in the wheat field, or the barns, whatever we could do to avoid the pain in our lives.

If we cleaned house, Dad would let us walk several miles to play with a friend. The friend’s mother was the babysitter. We would “coon hunt” or try to shoot frogs with a bow and arrows. We lost all
the arrows.

One day Mom snuck in a call. “I’m praying for a miracle to get you back.”

“Get out of bed.” My Dad yelled. “Get dressed and meet me at the car.”

He had been gone all night again. I put on a white T-shirt, my ‘farm jeans’, and a pair of blue Converse tennis shoes—no socks. He drove us to town, to Aunt Marie and Uncle Pint’s house.
Mom was there!

My sister had gotten sick at the babysitter’s overnight. She had a 106° temperature. When they couldn’t reach Dad, they got ahold of my aunt. They didn’t want to be involved.

“The baby’s gonna die,” she told her. ”It’s an ungodly fever!”
She gave the babysitter my mother’s phone number.

Mom rode a bus from Kansas City. They said that when she got there, they placed the baby limply in her arms. And then something miraculous happened. The fever broke. The baby survived.

Now, standing there, Dad cussed my mother out. I thought he was going to beat her up again.

“I just started a new job and I’m late.” He yelled. Then to my brother and me, “Go to school.” He quickly left, evidently expecting us to walk to the school. We always did whatever he commanded.

“Let’s take you to school,” my Mother said.
My heart sunk. What was she doing?

We went to school and Mom had us pick up our things. She talked to the office and we left. We then got on a bus and went to Kansas City to live with her.

Many people talk of God healing them of great illness and pain. The miracle here was not the healing but the fever itself. It wasn’t an ungodly illness. It was a Godly illness that God sent my sister to get us out of that terrible situation.

Years later, they bulldozed the farmhouse that we used to live in. My Dad had abandoned it and it had been taken over by wild dogs. My Aunt Marie’s house is no longer there either. But Grandma’s house is still there. I can’t help but wonder if that nickel is still there on the threshold. It would take a miracle to remove it.